Idyll on an Island! Sound of Harris is a brand new luxury holiday cottage for two in the south eastern tip of Harris. A romantic sanctuary on the edge of the world and a gem for the discerning traveller.

We hurtled over The Golden Road from the ferry port at Tarbert down to Borrisdale over inlets of grey rock and fertile machair, fringed by florid seaweeds edging to the Minch and the Atlantic Ocean. Our destination was a holiday cottage that was to be our home for a long weekend on a remote island on the very edge of Europe.

The most striking impression of the new cottage is a fusion of Californian beach house with a mid-20th century British interior design beamed into the midst of a Gaelic crofting community. This mind-bending goes further – Harris is of such breath – taking contrasts that the landscape was used as stand – in for the planet Jupiter in the film 2001: A Space Odyssey.

We knew straight away that we had come to a very special and fascinating place. Sound of Harris is the latest addition to the range of high quality accommodation available on the island. Once bywords an archaic and remote wilderness, Harris today is has become a premier destination for the adventurous and experienced traveller.

The light and palate of its landscape beguile as the rocks and hills blend into beaches of crushed shell by the Atlantic surf where only the only crowds are the flocks of birds making their way back home. In the distance, faraway mountains brood darkly through the cloud and mist. Harris is an idyll of peace and tranquillity with a local population radiating warmth and quiet confidence.

‘Harris gets under your skin. You either get it or you don’t but if you do you won’t want to leave it”. Rob English, who developed and owns Sound of Harris, declared as he welcomed us. It was a sentiment that we heard echoed many times over the following days.

Sound of Harris nestles close to the sheltered inlet of Port Eisgein on an isolated cliff top location close to the promontory of Renish Point which forms the south east tip of Harris. On a clear day the site commands outstanding views from the Isle of Skye and across the mountainous spine of the Uists and beyond. Hundreds of small islets punctuate the crystal sea waters reflecting a truly pristine marine wonder. This vantage point overlooks the Sound that links the Minch to the open Atlantic.

The Sound of Harris Concept, the design and construction was a labour of love and is the first phase of an integrated living and working environment that will come on stream next year. Rob and family are busy installing a tweed weaving shed for their business that will design, make and market high quality Harris Tweed goods to customers in the UK and internationally. The brand will be known as Borrisdale Tweed.

Harris Tweed –the island’s most famous product is undergoing a revival with growing demand for the distinctive, sustainable cloth. It fits seamlessly with the design ethic of the development and a natural and logical component of Sound of Harris concept. Borrisdale Tweed will collaborate with local artists, designers and the community. By 2016, guests can see at first hand the traditional craft weaving of Harris Tweed, a well-loved product that has made the island famous throughout the world. Sustainability has been a central feature through all stage of the process.

Style and Function Inside and Out

The style and function of the architecture and interiors are as rich and diverse as the surrounding landscape. The building construction was inspired by the classic croft house of the early 20th century – rendered masonry gables, cast concrete skews, timber infill and framing and a sheeted roof. The construction embraces sound principles of sustainable construction and renewable energy technologies. State-of –the-art solar heating and super insulation makes the cottage warm, safe and sound however wild and stormy the sea. Sustainability has been at the centre of attention during construction and achieving a Green Tourism Award is a priority.

Standing in the living area watching the rise and fall of the Port Elsgein tide, the wall to ceiling windows (and telescope), made me think for a brief moment that I was looking out on The Big Sur Coast in California. It was only when a black-faced sheep wandered into view that my true location was recalled.

It would be easy to imagine in winter what a comforting cocoon the cottage would be when outside a south-easterly gale is crashing waves over the rocks below. Or on a clear night observing the Milky Way with the prospect of the Aurora flickering over the hills to the north.

This outstanding luxury self-catering accommodation is based around a light and spacious open plan living area. The south and west facing aspects are fully triple-glazed, to make the most of the coastal location and uninterrupted views. The well-equipped kitchen and adjacent dining space sits under an imposing vaulted ceiling, with panoramic views over the Sound.

This is contrasted by a comfortable reading area and snug, warmed by a solid fuel stove. Satellite TV, hi-fi with mp3 player dock, DVD player and satellite broadband connection (Wi-Fi), together with an extensive and diverse library of books and films. The sound is amazing.

The bedroom provides a peaceful and tranquil sanctuary and the bed is one of the most comfortable that this traveller has had the pleasure of sleeping in. En-suite is a shower room and Japanese style soaking tub that’s big enough for two.

Inside the texture and fabric of the landscape are reflected in the interior design and furniture. The mid -20th century style features classic pieces from a range of British brands and designers including R.W. Toothill, Elliots of Newbury and Robin Day in addition to favourites such as Ercol and G-plan (E.Gomme) and Uniflex. Harris Tweed – a natural partner for the furniture design of this period is in evidence.

There is also a feature of bespoke tweeds woven by Donald John MacKay of Luskentyre – a sought after master weaver counts Nike and Chanel as clients.

Borrisdale offers an ideal location to explore south Harris and further afield – being equidistant from the stunning shell sand beaches and machair of the west and the more rugged “cnoc and lochan” landscape of the Bays.

If you’re in the mood for a car free day, the accommodation is an ideal base for walking. If you’re feeling energised, an ascent of Roineabhal, via Rodel, is rewarded with stunning views. Exploring Renish Point is also recommended – with its numerous coves and cliffs and views over to Skye and Wester Ross.

Nearby Rodel is the site of St Clement’s Church, housing the bas-relief adorned tomb of Alasdair Crotach Macleod. Equally intriguing is the more recent archaeology making up the remains of the WWII radar installation – underground shelters and rusting machinery amongst the flag iris and monbrecia.

Harris hosts an annual Mountain Festival in September, with guided walks and lectures and the famous 5 Peaks Challenge.

Port Eisgein and Renish Point offer excellent rock fishing for the experienced angler and novice alike. A ten-pound Pollack was hooked at the bottom of the croft a mere 50 yards from the cottage. Great in a curry.

How to book our cottage?

Complete form and we will be in touch. 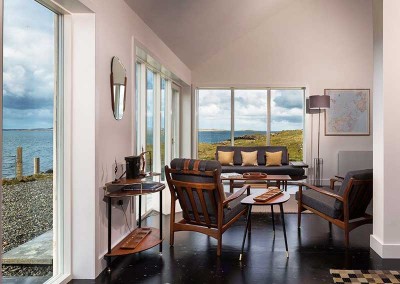 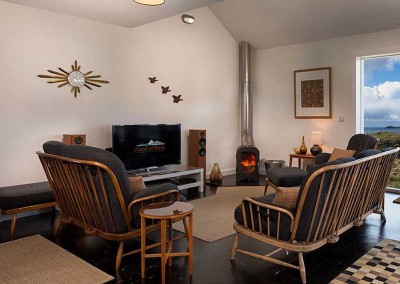 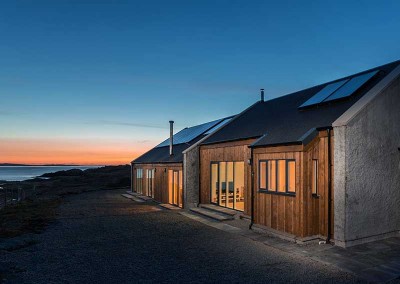